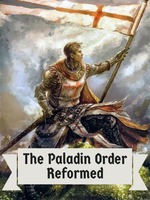 What is The Paladin Order Reformed

The Paladin Order Reformed is a popular web novel written by the author Supersam362, covering MONSTERS, GAME SYSTEM, PALADIN, TEMPLAR, SYSTEM, CRUSADE, FANTASY, ROMANCE, ACTION, ADVENTURE, Fantasy genres. It's viewed by 78.6K readers with an average rating of 4.78/5 and 41 reviews. The novel is being serialized to 47 chapters, new chapters will be published in Webnovel with all rights reserved.

Christian is an orphan raised from birth by the Paladin Order. He trains hard to become someone worthy of wearing the title "Paladin Knight". He becomes exceptionally strong and quickly rises through the ranks of the Order. But after slaying countless demons, beastmen, and others, he becomes emotionally numb to cope with the countless lives he's taken. This is until he saves a beast girl from the sword of his comrade. He's then forced to choose between her life and his place in the Order. (I do not own any artwork used in this book, all credit goes to it's respected artist)

The Requiem of an Emperor