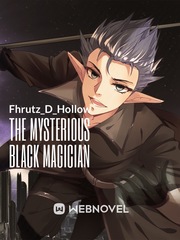 What is The Mysterious Black Magician

The Mysterious Black Magician is a popular web novel written by the author Fhrutz_D_Hollow, covering SYSTEM, GAME ELEMENT, MAGIC, DEMONS, ROMANCE, SCI-FI, DEMI-HUMANS, HIDDEN-POWER, WEAKTOSTRONGMC, MODERN FANTASY, Fantasy genres. It's viewed by 1.9M readers with an average rating of 4.58/5 and 94 reviews. The novel is being serialized to 238 chapters, new chapters will be published in Webnovel with all rights reserved.

RPG STYLE NOVEL, MC DOING QUEST, KILLING MONSTERS, LEVELING UP, GAINING SKILL, AND etc... SYSTEM Deity, a newly invented modern gadget that helps humans to breakthrough their limiters. Our protagonist Yman Talisman was a young man, 17 years old, and an orphan. After he found out that he had a Hollow Cell symptom, he rejoiced. Now there was a way for him to cure his ill sister. But on the day of evaluation exams, because of an incident, he was late and only managed to get the weakest magic skill among the rest. How can someone like him fight monster monsters when his magic was the weakest and no use for fighting? No group wanted to let him joined them. In order to cure his sister, he had no choice but to fight monsters alone. When he finds out about a certain item that able to heal any kind of illness, he didn't think twice and embark into a journey. Leaving his ill sister to a trusted friend, he left the city and delves into adventures to search for it. Message me at discord if you have questions and suggestions: CloudSky#4375