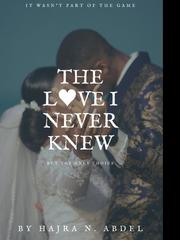 What is THE LOVE I NEVER KNEW

THE LOVE I NEVER KNEW is a popular web novel written by the author HAJRA N. ABDEL, covering Contemporary Romance genres. It's viewed by 92.4K readers with an average rating of 4.64/5 and 40 reviews. The novel is being serialized to 34 chapters, new chapters will be published in Webnovel with all rights reserved.

"THE LOVE I NEVER KNEW" People say life is sweeter when you finally achieve your goals. What happens when out of the blue, nothing seems to make any meaning at all. Belinda Parkers a 25 year heart broken independent lady who lost her parents at an early age which later on she discovered it was all a lie, a despicable lie that did not only befuddle her but also tortured her mentally! She was a strong woman who was ready to fight against all odds. She discovered that dawdling wasn't going to do her any justice and so she chose to strive for her goals of being the best dessert chef in Stockholm city, Sweden, having a stable life without lacking anything or having to ask her malignant aunt any penny to sustain herself. It turns out falling in love again isn't among her set goals. Everything else but not love. Coincidentally fate plays a dirty trick on her bringing Breyson Heights on the same paths she is crossing. Breyson Heights is a cocky rich hardworking gentleman who doesn't mix work with his personal life. He is the Managing Director at his father's hospitality establishment known as "LA SCOOPERS'". Smugness was what his body language portrayed but deep down he was not the kind of person who would go around flexing off on people. He was an angel if only you got time to know him more but a devil on the outside. Funny though that they are both going through the same setbacks in their lives. They try as much as possible to fight what they feel towards each other but the forces are too much to handle. Question: Could it be that they are both experiencing "THE LOVE they NEVER KNEW Or Is it just a fling as the narrative has it?! What will be the step forward? Ignore the great feeling of loving and being loved with immense love and affection? Or Will they give each other a chance even though it's crystal clear to them that things never really worked for any of them in the past?

The Secrets behind our breakup