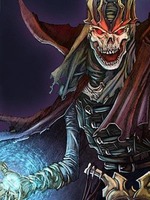 What is The Lich System

The Lich System is a popular web novel written by the author Bobbydale_Murr, covering SYSTEM, ARMIES, REINCARNATION, FANTASY, WEAK TO STRONG, Fantasy genres. It's viewed by 105.2K readers with an average rating of 0/5 and 9 reviews. The novel is being serialized to 50 chapters, new chapters will be published in Webnovel with all rights reserved.

Duth our main focus has died tragically, more to the point he died watching his cousin die. Only to receive in kind a deadly sentence. originally content as now in spirit they rest. He has been woken to find himself pulled from the realms, not just him but many others like him. Other souls. Their tormented suffering allowing magic to expand to greater feats. Now vengeful not only with those who took his family, friends and other souls, but the world that stood by and allowed it. Duth with sheer will and perhaps an unknown entities help rises up as an avenging lich. Only it was all wrong, he had a system.. he wasn't right. emotions almost stripped bare, just like his flesh. Dark energies flowing in his metaphoric veins. But there stood a few solid goals. World domination and to bring the wraith of souls upon the unfortunates. Now in a game he never intended to play. Duth starts his journey of questionable morals and a seething and wrathful will.