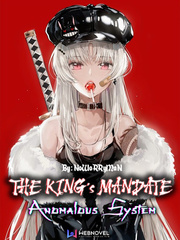 What is The King's Mandate: Anomalous System

The King's Mandate: Anomalous System is a popular web novel written by the author NoWoRRyMaN, covering SYSTEM, R-18, HARÉM, ROMANCE, ADVENTURE, ACTION, COMEDY, EVOLUTION, POLYGAMY, SCI-FI, Video Games genres. It's viewed by 2.8M readers with an average rating of 4.71/5 and 101 reviews. The novel is being serialized to 386 chapters, new chapters will be published in Webnovel with all rights reserved.

"Whoever dares to harm my loved ones shall cease to exist" In an alternate universe, one where no one knows about gods and religions, unknown to humans, history has been altered and forged into something they can't help but believe. Humans have no true relations with each other, money is their everything. Anything could be bought with money, anything could be sold for money. This was the scenario when the first virtual reality game was released 30 years ago, and a tragedy ensued. Soon after, VR games were banned in the entire world. But, after a few years, one after another, a better version, an advanced version of VR games were released. Daas Ryle, a boy born in royalty. Attacked by the entire world who wants him and his family dead. Losing his loved ones turned him into a psycho. He started to find joy and satisfaction in killing and crushing them. His hate burned like hellfire. Having suffered hell in his childhood, he became an emotionless boy who thought studying was his only way to live. That was when he met 'her', the girl who changed his life. He slowly started falling in love with her. She was his Salvatore. Daas began changing, becoming a normal high school boy, at least from the outside. Never before had he played a single game, yet he was recommended to play a VR game by his girlfriend. Little did he know that agreeing to play the game would change his life. How the game would affect him in the real world. How his future would change. His system, his future reign as a king, his becoming a 'monster'. Everything started here. Meeting new people, unraveling the dark secrets of the cruel world he lives in. Will he ever find out the truth about his system? How did he end up with the system in the first place? Can he ever become the king he aspires to be? =============== Thanks For Reading :) _____________________ You Must Be Reading This On Webnovel.com _____________________ Support Me On Patreon -https://www.patreon.com/NoWoRRyMaN. =============== Here are the tags in detail, Virtual-Reality//Game-world// Real-world// Fantasy// Game elements// Fantasy Elements// Strong Love Interests// Mystery// VRMMO// Futuristic setting//Weak to strong// Overpowered MC// Multiple Love interest// Marriage// Prince// Rich Mc// Early Romance// Magic// Caring MC// Ruthless MC// Princess// Handsome male lead// Beautiful female leads// School life// Hidden abilities// Mysterious powers// Kings// System elements// Kingdoms// Royalty// Polygamy// Kings and kingdoms,//Gore// Ecchi// mature. [Much More Tags in the Auxiliary Volume] ============ Disclaimer- The cover is not mine. I (my bro @birdu) just did some editing. If you are the owner of the image and want me to take it down, tell me in the review. ============