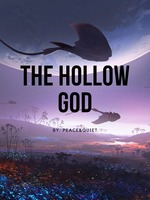 What is The Hollow God

The Hollow God is a popular web novel written by the author PeaceAndQuiet, covering GOD, ELEMENTAL, REINCARNATION, CULTIVATION, MAGIC, COMEDY, ACTION, ADVENTURE, Fantasy genres. It's viewed by 478K readers with an average rating of 4.68/5 and 59 reviews. The novel is being serialized to 25 chapters, new chapters will be published in Webnovel with all rights reserved.

A boy who has been bed sick since he was born finally reached the end of his life. Fortunately the gods decided to give him another chance and allowed him to be born into a new world. The only problem was that, he was not human! "I was only joking when i said that all I needed was a healthy body and that i didn't even need to be human OK? You didn't have to take it seriously!!" The frustrated scream of a little manta reverberated in the dark underwater world.