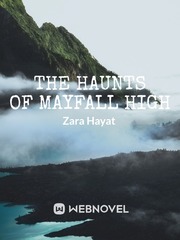 The Haunts of Mayfall High

What is The Haunts of Mayfall High

The Haunts of Mayfall High is a popular web novel written by the author ZaraHayat15, covering ROMANCE, COMEDY, DRAMA, MYSTERY, HORROR, FAMILY, HIGHSCHOOL, CRIME, FRIENDS, ENEMY, Fantasy Romance genres. It's viewed by 2.5K readers with an average rating of 0/5 and 1 reviews. The novel is being serialized to 16 chapters, new chapters will be published in Webnovel with all rights reserved.

Mayfall High is the brightest school with the darkest secrets. And something haunts it, every day and every night. ...... Sara is anything but your average teenager, except that she hates direct sunlight. She is a straight A student, has two best friends, Victoria and Patrick, a loving family and not to mention, she also has an enemy, who she once fell for. She had a really dark past. After all that suffering, she decides to forget them and move on. Her life was now really smooth. But one day, while cleaning her classroom, she finds a really old picture. Out of curiosity, she and her friends try to discover the deep secrets of the photo. But by that single photo, they come to know the disturbing secrets of their school. Little did she know, that a lot was kept hidden from her. Things, she didn't expect, happen. Dating, having a secret admirer, creepy stalkers, murders, and a lot more. Together, will they unravel the mystery of their school?