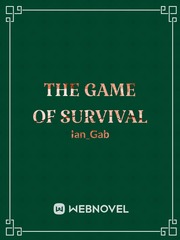 The Game of Survival

What is The Game of Survival

The Game of Survival is a popular web novel written by the author Ian_Gab, covering ZOMBIES, SURVIVAL GAME, NPC, ACTION, ADVENTURE, GOLDEN ARC, 100 FLOORS, Fantasy genres. It's viewed by 58K readers with an average rating of 0/5 and 2 reviews. The novel is being serialized to 38 chapters, new chapters will be published in Webnovel with all rights reserved.

In 2036 More games were introduced around the world and One of them is the game called "The Game of Survival" Its the popular FPS zombie game That its so popular around the world. But there was a secret from the game that no one knows. Andre, Jake, Ljay, and Eman are one of the players of this game. They just play peacefully and without any problems. Until the one fateful moment, They realized that they were inside the game. Almost 12,000 players were trapped inside the game including them. "If you die or become a zombie on this game you cannot go back to the real world." "To Beat the game, You must find the Golden Arc and proceed to 100th floor to get out from this world". These words starting their new adventure inside the game. Are they Going to survive or Are they going to be a Zombies on this world?