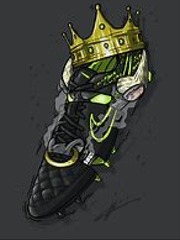 What is The Football King

The Football King is a popular web novel written by the author W0lfie, covering REINCARNATION, SYSTEM, MODERN, ROMANCE, COMEDY, FOOTBALL, SPORT, MALE PROTAGONIST, GAME ELEMENTS, REAL LIFE, Competitive Sports genres. It's viewed by 530K readers with an average rating of 4.32/5 and 17 reviews. The novel is being serialized to 46 chapters, new chapters will be published in Webnovel with all rights reserved.

Ever since he was a kid, Julian always aspired to be a footballer. He tried everything from training intensely to going on strict diets. He was accepted into an academy, one of the best academies, his favorite team, Manchester United. However, he was axed from the team. Why? He had no football skill. The only reason he even became an academy player was because of his vigorous training but sadly, that still wasn't enough. One day, as he lay on his death bed, the only thought which passed his mind was: "I will be the best footballer there Instagram: https://www.instagram.com/kingw0lfy/?hl=en or just kingw0lfy. Twitter: https://twitter.com/w0lfie6 or just w0lfie6. Twitch:https://www.twitch.tv/itsyewolfy/ PS: Cover Art not mine. Also, might no be able to post as much because of school. Anyways, hope you enjoy!

THE GREATEST OF ALL TIME