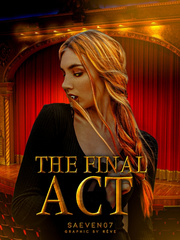 GOLD TIER WINNER OF WFP #11 What happens when a vampire joins a coven of witches? Chosen as the vampire to continue their tradition, Evelina journeyed to the capital with a goal of observing her prey, planning her strike. It was her destiny to be there, her destiny to bathe in the most delicious type of blood amongst all. What she did not expect was that she will find more of acting affairs than just bloodlusting because, bat's shriek, she just joined a theatre troupe with witches as actors! It was for her plans, she swear! Until it became more to her than just a mere stepping stone. Soon she must decide if her new found relations, the people she began treasuring, held more importance than the honor and respect she must get from her kind. -*- EXCERPT FROM THE THIRD CHAPTER: It wasn't supposed to be like this. She joined them in their laughter, more mockingly than real. "Pardon but have I missed the joke?" The protagonist beside her chuckled, moving closer to whisper. "Darling, we don't accept just anyone. Especially not a minx who thinks that she could get anything with just a twirl of her hair."