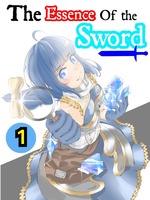 The Essence of the Sword

What is The Essence of the Sword

The Essence of the Sword is a popular web novel written by the author Arthy_Pen, covering ACTION, COMEDY, MONSTER, SWORDS, WEAPONS, FANTASY-ADVENTURE, CREATURES, SMITHING, LEGENDS AND MYTHOLOGY, Fantasy Romance genres. It's viewed by 29.4K readers with an average rating of 0/5 and 0 reviews. The novel is being serialized to 38 chapters, new chapters will be published in Webnovel with all rights reserved.

“I hate swords!” Astoria Justocia, the daughter of the finest swordsmith of Ea, despises the cultural object of her own city. On a fateful day, while helping her father on a quest, she miraculously encounters an unworldly sword on her way! Not only that, much to her dismay, as she was also appointed as a Myrmidon by her own kin! What will be left for her own ultimate goal which is, to have a peaceful life devoid of any ‘infernal sticks?’ Follow the out-of-this-world shenanigans of Astoria and her other Myrmidon companions as they accept quests, defeat the evil, and uncover the secrets regarding their ethereal weapons.