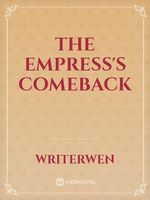 What is The Empress's Comeback

The Empress's Comeback is a popular web novel written by the author WriterWen, covering REINCARNATION, CULTIVATION, WEAK-STRONG FEMALE PROTAGONIST, NONROMANCE, Fantasy Romance genres. It's viewed by 2.9K readers with an average rating of 0/5 and 1 reviews. The novel is being serialized to 2 chapters, new chapters will be published in Webnovel with all rights reserved.

Left alone to fend for herself, how would the 12-year-old Sheng Wenruo search for her grandfather when the only thing he left for her was a letter? Oh, and that seemingly useless piece of stone as well. Adding the fact that she had a frail body which can fall over any second, just how much hardship would she have to suffer for her to return to where she truly belonged? As an empress respected by many in her previous life, how would Sheng Wenruo be satisfied with this frail body? But there was nothing she could do about it. She could only blame her bad luck. Just when she was starting to get used to the life of the original owner of the body she had taken over, she woke up one day to find that she was all alone. The grandfather that she had come to love suddenly disappeared and she was told to find a person named 'Qin Han'. Join Sheng Wenruo as she used her intellect to get through the obstacles blocking her way and make a comeback to her empire!