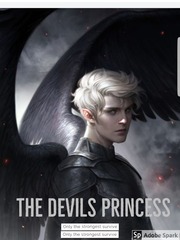 Long before, Offical country's and nations the biggest tribe and now the biggest and most powerful country, Aldovia made a pack with the royal downworlders (vampires, demons werewolves and ect, mostly devils being royals ). A heir to the Aldovian thrown must marry a royal down worlder on the first millennium . That year has finally come for the devilishly handsom first prince Lucifer to chose his bride . He's watched her for ages from a distance and already knows he's in love with her, Alessandra the eldest and most beautiful daughter . She's fiery,stubbon and extremely independent with her heart set on being the imperial ruler. Oh and a minor problem she hates him . (I don't own the photo don't sue me, I'll take it down if you want ,I'm sorry thank u anyway, bless your soul and I just found it on the internet ) ( I found the picture of the internet I don't own it I swear I just took it of the internet if it is anyone's I will take it down ) ( Expect spicy content )