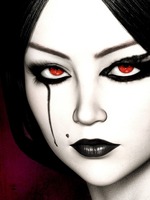 What is The Dark Queen

The Dark Queen is a popular web novel written by the author Shane_Dalton, covering YURI, VAMPIRE, FANTASY, WAR, ANOTHER WORLD, BLOOD-GORE, WORLD-AT-WAR, Fantasy genres. It's viewed by 33.7K readers with an average rating of 0/5 and 3 reviews. The novel is being serialized to 8 chapters, new chapters will be published in Webnovel with all rights reserved.

A meek woman living as a commoner in the warring era. She gets captured by enemy troops, and brutally tortured for information on her nation. But what does a commoner know about the dynamic of her country? She isn't in the know, so they continue to torture her. They take turns doing unspeakable things to her, and one day she snaps. They toss her away in a remote location in the mountains, leaving her to die. She prays to any god that will give her the power to take her revenge out on the world for treating her so. And one goddess hears her plea. Nyx, of the Night. She bestows a gift to this hurt women. The power of shadow and darkness, the power to wreak havoc on all living creatures. She grants her the power of the Vampire. What's more, she offers a boon along side it, making her a pure blood vampire, a being whom isn't affected by the usual weaknesses of the vampire race, such as sunlight, or religion. There is just one thing the goddess asks,"Destroy the world, and you shall gain entry into my loving embrace." What will Evangeline do? Will she become death itself, or be the same weak hearted commoner? Or will she go one step further, and give her new goddess a boon that even she couldn't anticipate? (Author's Note) I will drop 4 to 6 chapters a week starting on Monday every week. I just don't write on Friday or Sunday.

On My Way: The Demon King Made Me His

Villainess 101: The President's wife is a vengeful devil