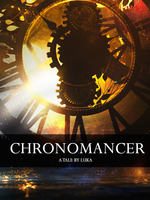 What is The Chronomancer

The Chronomancer is a popular web novel written by the author TheTaleTeller, covering ACTION, REINCARNATION, FANTASY, WEAK-TO-STRONG, TIME TRAVEL, MAGICAL REALISM, MAGIC ACADEMY, MALE MC, CHARACTER GROWTH, HIDDEM-GEM, Fantasy genres. It's viewed by 8.9K readers with an average rating of 0/5 and 2 reviews. The novel is being serialized to 6 chapters, new chapters will be published in Webnovel with all rights reserved.

In Gaia, magic has been studied for centuries by every civilization there is, with several divergent "paths" of study, where scientists test the limits of mana. In the mainland, Anton and his brother Frank are finally admitted to Astra Magic University, and they depart, leaving behind their old ruined lives. However, amidst his studies, the boy genius discovers a new path of wizardry to study: Chronomancy. Follow the story of Anton as he deepens himself into this brand new area of magic, and discovers a secret that might just put his life, and of all others he know, at risk. Weekly releases every Friday, at least 10K words per release starting from next week.