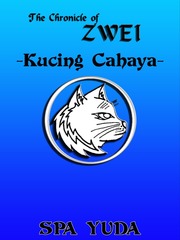 Gaesia, a world where humans have become extinct and animals live as the top of the food chain. Some of the animals that live in it have superpowers which are marked with different eye colors between left and right, they are called HC (Eitsee). Ragna, a red fox who was being hunted by Hyena, accidentally met a creature floating in a tube. The creature is a young white cat and named Zwei. Who is Zwei? What is HC? A prototype novel, typed in 2013 totaling 100 pages, in the future the story will be changed with different themes and plots.