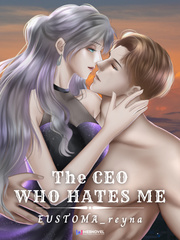 The CEO Who Hates Me

“He knew he should not go easy on her, but his heart was challenging his mind…” --- Arya Tan, a beautiful, young, wannabe actress, made a deal to make him fall in love with her, only to leave him heartbroken and devastated in order to save her loved ones' lives. Would she be able to escape his wrath or her vow to herself to repay the debt of love that she owed to him? How she counted each day in self guilt until they met again. Ryu Ken, a ruthless CEO, who never gave a second glance to any woman how-much-ever beautiful she was, gave his heart to this woman. But despite his warnings, she broke his heart and left him broken and lonely. He then vowed to find her and punish her as brutally as he could. But could he really punish her when deep in his heart it was still her he longed for? Where would his search for her lead him to, and how many enemies he would have to topple to get what he wanted? warning: R-18 content * No Rape ====== Excerpt: "Leaving already? You seem to be in such a rush to talk to me. Why don't you spill it out now?" Stunned, Arya wondered if she was hallucinating. The voice was very familiar. She felt the man's arm encircled her waist while she was abruptly pulled towards him. He then leaned forward and scornfully whispered into her ear, "Aren't you here to negotiate? I was hoping you had a better offer." Arya frowned and abruptly pushed the man, attempting to get away from him. Instead, she was pushed back until she could feel her back pinned against the wall. She tilted her head to look up at the rude man and was left with open-mouthed looking at a familiar face. She was shocked but mumbled, "Ryu?" Ryu smirked and stared at Arya's slightly opened lips and said, "Did you miss me? How about this?" Before Arya can utter another word, Ryu captured her lips abruptly and kissed her roughly. ============= Author's Note: Hope you enjoy reading this ORIGINAL novel of mine (It's absolutely a happy ending! Author hates sad ending!). If you like the story and would love to support the author personally, you may send donations to the ff: Buy me a Coffee -- https://ko-fi.com/eustoma Paypal Account -- paypal.me/eustoma Many thanks in advance for your support. With Lots of Love, EUSTOMA_reyna P.S. My Other Hate & Love Series (Standalone book): The CEO Who Hates Me (completed) The General Who Hates Me (completed) The Doctor Who LOVES Me (completed) Loving A Heartless Lawyer (in writing) contact me at: Discord Link: https://discord.gg/PNGkTUy Facebook Page: @eustoma.reyna twitter: @EUSTOMA_reyna instagram: eustoma_reyna