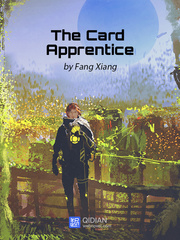 What is The Card Apprentice

The Card Apprentice is a popular web novel written by the author Fang Xiang, covering BROTHERHOOD, ADVENTURE, Sci-fi genres. It's viewed by 3.3M readers with an average rating of 3.86/5 and 217 reviews. The novel is completed and can be read all 611 chapters in Webnovel with all rights reserved.

This is both a work of science fiction and an exploration of the meaning of life, love, literature and art. Brainpower is no longer the main ingredient for being human in this far distant future world. Spirituality, physical balance, and diligence all come together as integrity for Chen Mu, the Card Apprentice. The cards which Chen Mu masters in his own scrappy way, distill all the powers of the cosmos – human and nonhuman – into something that is not a book, not technology, and neither art nor magic, but is these and more. Learn about these strange cards, which can embody everything you might imagine for the future of technology, but also a future beyond technology which promotes the best, and sometimes the worst, from mankind’s past.

The Record of Unusual Creatures