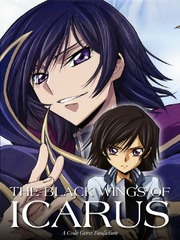 The Black Wings of Icarus

The anime series 'Winze', hits the television and became the most popular show in Asia. It follows the story of Merthin Icarus Vespaland who crowned as the king of Leuvania after the late king and queen got shot to death. His heart filled with hatred and he swore in front of their dead bodies that he would have his revenge by using his power to kill the perpetrator in his hands. Merthin's wrong decision and perspective caused him to curse by a witch, and brought him to the world where he don't exist. Meanwhile, a typical college girl named Ivy Kallen hit him like a bombshell. Believing that he came from the world of anime characters, she helped him to find the way back to the kingdom. Apparently, Merthin never expected to do such a thing that will bring Ivy to a kind of dangerous game called love. "Open your heart to someone and the curse shall be broken. In return, you will end up alone in the desert as the wind takes her ashes." Could he make a right decision this time? His choice will remain a mystery. Join Merthin as he explores the world where love, pain and sacrifice are the main opponents. -TAGALOG LANGUAGE STORY- All rights reserved 2019