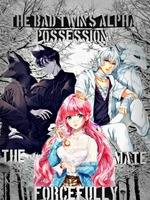 What is The Bad Twin's Alpha Possession : The Forcefully Mate (COMING SOON)

The Bad Twin's Alpha Possession : The Forcefully Mate (COMING SOON) is a popular web novel written by the author Stella_Savage, covering ROMANCE, R-18, HARÉM, MATE, SWEET, WERE-WOLF ALPHA, HUMAN-NONHUMAN RELATIONSHIP, FORCED, Fantasy genres. It's viewed by 1.6K readers with an average rating of 0/5 and 0 reviews. The novel is being serialized to 2 chapters, new chapters will be published in Webnovel with all rights reserved.

"We adore you, amora, we wouldn't sending you away to your kingdom back.forever." - Aiden, The Black dominant Yet possessive Alpha King. "We want you birth for our youth, Even though you ain't our mates *smirk* your our's Amora Scarlet.." - Xander. The Sweet yet demanding White Alpha King. Amora Scarlet, The misfortune Princess. the symbol of hatred of Slydavia Kingdom, Even her own family hates her. Nothing she can do about it except ignore them. But, Her misfortune grows worse when she unexpectedly steps into the werewolf territory. the more serious part is, she was taken and auctioned by them. When she believes no one would want her, The twins of alpha king appear and caught interest to own her. Her life began to change the moment when both of them wanted her. "I'm willing to die than being their possession." - Amora Scarlet. amora scarlet is the only human that being embraced by twins alpha, even the werewolves and humans envious of her but she never feels pleasant about it. it is have an opportunity for her to run away from them?