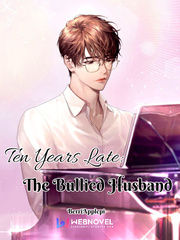 What is Ten Years Late: The Bullied Husband

Ten Years Late: The Bullied Husband is a popular web novel written by the author BerriApplepi, covering HANDSOMEMALELEAD, COMEDY, MODERN, TRAGEDY, ROMACE, BADASSFEMALELEAD, ADORABLEKIDS, Contemporary Romance genres. It's viewed by 3.6M readers with an average rating of 4.53/5 and 408 reviews. The novel is completed and can be read all 215 chapters in Webnovel with all rights reserved.

Li Bingbing is a strong-willed woman who would not allow anyone to belittle her. Her strength? She was shameless. She wasn't afraid to tell her thoughts to anyone around her. Her weakness? It was none other than Sisi. Meanwhile, Lu Xian Yu is a ruthless man of the underworld who is also extremely possessive. Although, he had never thought that there was going to be a day where he would actually meet his match. They came into an agreement after their small argument but in that agreement, they told each other that they were not allowed to fall for each other. The first one to fall in love was the loser. And yet, in the end of it all, the player got played. WARNING: MUST PREPARE A TISSUE BOX WHEN REACHING CHAPTERS 130s!!!! ---- Author: BerriApplepi IG: @berriapplepi Discord: https://discord.gg/z56kkGG Donate: paypal.me/berriapplepie Modern Fairytale series: The Devil's Sleeping Beauty (Sleeping Beauty) Ten Years Late: The Bullied Husband (Little Red Riding Hood) The Devil who devoured Snow White (Snow White) Beast Under Her Dress: Princess, Don't Run! (Beauty and the Beast) My Evil Cinderella: Taming a Villainous wife (Cinderella)

Can you mend my broken heart?

Young Brother-in-law Is Now My Husband

Two Contracts - My Lover is a CEO

The CEO Who Hates Me