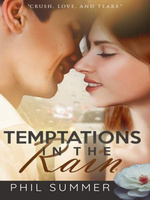 TEMPTATIONS In The Rain...

What is TEMPTATIONS In The Rain...

TEMPTATIONS In The Rain... is a popular web novel written by the author Phil_Summer, covering TRUE LOVE, SEXY ROMANCE, LUST, FIRST LOVE, LOVER, BOSS AND EMPLOYEE, HEARTACHES, LOVE AFFAIR, TEAR JERKING, Contemporary Romance genres. It's viewed by 9.7K readers with an average rating of 0/5 and 0 reviews. The novel is being serialized to 6 chapters, new chapters will be published in Webnovel with all rights reserved.

Heavy Rain kept pouring, their bodies are both Wet but their flesh felt Hot as they run Inside the hallway of the condominium. Finally they stop, Dale's opened the Door lock. Revealing this bachelor's unit that's full of simplicity and formality. He hold her hand, but Lucy stop and looked to his Tempting eyes. "I'm going to pay for this right?" "No your not! We... are going to pay for this! Because starting from this Moment, I will never let you be Alone!" His hot hands goes to Lucy's Tiny face, closed the gap to their faces as his warm Lips locks to Lucy's... They Met as a Student and a Cashier. Lucy Became Dale's First Love and Also First Heartbreak. It Maybe a Puppy Love but Its a Love that Tempted Lucy and Made Her Heart Flutters a Lot that Almost made Her Breakup with Her boyfriend at the Time. Lucy Knows that Dale Is Just a Kid but whenever their Together, Dale became a Handsome Young Gentleman Enough for Her to Felt the Chilz whenever His Near Her. 6 Years Later Fate Led them Together Again. Lucy Is Now a Hotel Receptionist and Dale Is the New General Manager who Happened to be the Hotel's Owner's Only Son. Dale Started to Play and Temp Lucy who Is Now In a Long Term Relationship with Howard. Now that Dale Is Oozing with Hotness and Manliness Enough for Women around Him to want to be Hold by Him. Will Lucy be Able to Push Him Away Again? Can the Love that Started with Temptation withstand the Hardships that will come at them? Crush, Love, Temp, Lust... Forever?