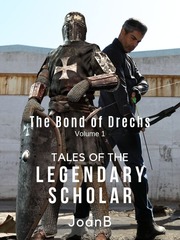 Tales of the Legendary Scholar

What is Tales of the Legendary Scholar

Tales of the Legendary Scholar is a popular web novel written by the author JoanB, covering FANTASY, MAGIC, ROMANCE, HISTORICAL, ACTION, ADVENTURE, SMART, TRAGEDY, HIDDENGEM, Fantasy genres. It's viewed by 109.8K readers with an average rating of 4.94/5 and 25 reviews. The novel is being serialized to 16 chapters, new chapters will be published in Webnovel with all rights reserved.

They meet in the most unlikely moment and turned their life around. Freidrech newly arrived in his own nation's capital city, which is so foreign to him compared to his village's idyllic and nondiscriminatory atmosphere, after he is forced to come. Now, he is facing a royal prince and tells him to bow. This draws out one of his late father's teachings from the deepest recesses in his mind. "The blood of your great ancestors runs in your veins. Don't easily bow down to anyone, or accept suppression by any being, not even from a monarch, unless you pledge your allegiance to him. Also, giving in to oppression is directly telling the oppressor that you're easy prey and open for manipulation." He is uncertain on how to face this oppression right now. Will he bows or not? What will he do to uphold his father's words while keeping his life safe? As for the prince, Theodrech has nothing to do with Freidrech, so he wishes to let this slip, but the boy opens his mouth and proposes the most ludicrous challenge he ever heard and triggers his curiosity. "I, Freidrech Goederf Gerboud, son of the late Village Chief of Wrilon, will challenge you, Your Highness, to a battle of riddles… If you win, I will not only bow but be your servant for the rest of my life." This amuses the prince. It is the first he met a boy of the same age who is not intimidated by the air of authority he projects. Rather, this boy challenges him. "Why are you so headstrong? In fact, bowing to me is an honor. You saw the King's noble Knights. When they saw me, they bowed," says Theodrech, testing Freidrech. "Allow me to be forward, Your Highness. For me, bowing to a monarch does not guarantee loyalty. If I were you, I rather have men who stand straight in my presence but who got my back, than bowing men who are dreaming of my death," replies Freidrech. The prince’s curiosity increases. A huge smile is seen on his face. Prince Theodrech decides to take Freidrech under his wing. Little did they know, this boy who Prince Theodrech takes in as his confidant and friend in the most ridiculous fashion is someone indispensable in his life and the one who can help him succeed the throne when he almost believes he has lost. Thus, the Tales of the Legendary Scholar begins. ______________________________________ Release schedule: For now, every other day. Later, I will release daily. NOTE: Please, don't copy this story and post it anywhere without permission from the author. Images above are not mine. ------------- New Ongoing Novel: 1. Whispers of Love from Xinyi to Ming (Ongoing) 2. The Recipe of Love (Completed) 3. I'm Guilty, My Beauty(Completed)

The World after the Fall