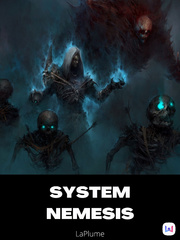 As blood rushed up his throat and leaked between his teeth, his sinister appearance aggravated to the point that he looked like demon. After his maniacal laugh, his punctured lungs finally gave out, causing his whole body to collapse on the ground, dyeing it a scarlet shade. His mind went blank, while his consciousness started leaving his battered body. *** After what appeared to be a few minutes, he suddenly woke up. He was startled at first, but realized that he had indeed died. He had no body and everything around him was black, without an ounce of life. It was an absolute void. ''So this is what happens when you die... You just drift in darkness... That's actually underwhelming... I wonder if I'll just fade away into nothingness'' When Derrick's thoughts were starting to drift, a prompt showed up in front of him. [Welcome Derrick Tarlin! This is System : Nemesis] [Would you like to take revenge? Yes/No]