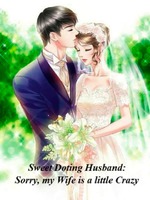 What is Sweet Doting Husband: Sorry, my Wife is a little Crazy

Sweet Doting Husband: Sorry, my Wife is a little Crazy is a popular web novel written by the author SamikshaRav, covering HIGH-SCHOOL, ROMANCE, COMEDY, TENNAGE LOVE, Contemporary Romance genres. It's viewed by 2.5M readers with an average rating of 4.71/5 and 296 reviews. The novel is being serialized to 171 chapters, new chapters will be published in Webnovel with all rights reserved.

No one knows who is she, how does she look and where does she live but they only know that she is the apple of the Rao family, born with beauty and a great mind. After suffering from a cruel incident when she was five, she was chased by nightmares every night and then was forced to leave her country to protect herself. After staying abroad for twelve long years, she finally decided to return to her country and face the nightmare courageously but to her surprise, when she returned she found about her late grandmother's promise…and that was to marry her to the heir of Mu family….Mu Jun. What kind of person he is? She has no idea. Mu Jun, the only grandson of Elder Mu, lost his mother at the age of ten. Because of his cunning and greedy stepmother, he was forced to distance himself from his father and grandfather. To the world, he was the heir of the Mu family but he had another identity in the underworld and that was one of the five pillars of the Garuda. What kind of person he is? Other than his identity, Sia was not aware of anything about him but as obedient as she was, she decided to disguise herself and enter his life to know more about to him and fulfill her late grandmothers wish. From school life to love life, from being crime partners to investigators will they have a smooth road? Will Mu Jun and Sia be able to find out about the secret of their life and purpose of marriage? To know more about how the two love birds will end up, follow up the story… After hesitating for a while, she asked: “Darling, don’t you like kids?” “No I don’t” he replied without any hesitation Humming, she asked in another way “Darling, do you like daughter?” Closing the file, he looked at her and said “Okay…let’s make one” After a few years, he frowned deeply and said “I won't give up. I want a daughter….let’s make one” “.…” ‘are you sure? We already have three sons’

Royal love - I fell in love with CEO

Mark of the destiny