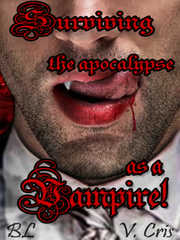 Surviving the apocalypse as a vampire! BL/Yaoi

What is Surviving the apocalypse as a vampire! BL/Yaoi

The apocalypse came; firstly only with the side effects of another world war, the radioactive making people sick and poisoning the air and food, but then the zombies came. And they hit hard against an already fragile humankind. Not that it matters to me, really, I’m a vampire after all; no zombie can match me and is even fun to bully them around while I have the whole city for myself. As if a swarm of ants would bother the passing tiger. But one thing did, one that was the worst nightmare of any immortal being. Loneliness. And being bored to death on top of that. Good thing that some humans appear close to my territory, that way I have someone to play with; and the mere thought makes my mouth water, so many things I could do to them… And that made me very, very eager. *** MC(Main Character) ML (Male Lead/couple) MC: I hope you two are prepared. ML1: Prepared? For what? ML2: Don’t you dare hurt him… MC: *smirks smugly* For vampires are known to have a lot of… stamina in yourselves… ML2: … *Stares down meanly but hides blush* ML1: Stamina? For what? *look at both of them, confused* *** **Mature content** BL(Boys love) This book contains explicit sex, gore, strong language, bondage, bdsm and threesome between men. ☆=(ゝω･)/

Reincarnated into a Hell Hound - BL/Yaoi