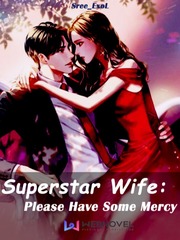 What is Superstar Wife : Please Have Some Mercy

Superstar Wife : Please Have Some Mercy is a popular web novel written by the author Sree_ExoL, covering R-18, ROMANCE, ACTION, REVENGE, COMEDY, CELEBRITY, HATE-LOVE RELATIONSHIP, BILLIONAIRE CEO, FAMILY AND FRIENDS, ARRANGED MARRAIGE, Contemporary Romance genres. It's viewed by 1.2M readers with an average rating of 4.77/5 and 28 reviews. The novel is being serialized to 198 chapters, new chapters will be published in Webnovel with all rights reserved.

[WARNING! THIS BOOK HAS MATURE CONTENT] Elysia Davies, is a true beauty with many talents. She is not only the top actress in Los Angeles, California but also the lead vocalist of the ever popular girl group 'Spicy Sugars'… Ivan Moore, the handsome CEO of 'Mystic World & Entertainment', is not only the richest business tycoon of the world but also the charismatic member of the famous boy group 'Golden Amigos'… She is a troublemaker, while he is the peacemaker… She is the 'Feisty Queen’ of the industry whereas he is the 'Chill Dude'… She loves to torture people who hold a grudge against her while he is the king of forgiveness only towards those folks who doesn’t target his families… She is the rich spoiled brat while he is the wealthy respectful heir… Simply, she is the Tormentor but he is the Savior… So many differences between both of them yet they had one thing very much common in their lives…'HATE'..!!! They hate each other with every living cell in their bodies… Just a look at each other is enough to flip their mood off. If they were kept in the same place, it could turn even the most peaceful heaven into a scorching hell. In short, they should never be left alone with each other. That could cause chaos and disasters. But the question is, what will happen when these two opposite poles attract? What if the yin and yang, are abruptly tied together by a so called 'Arrange Marriage'? Will the hatred between them overcome all the boundaries and blossom into LOVE? Or, will they still continue as the two sides of coin rather than blooming into the most 'Mismatched Couple'? And, what does their lives have in store for them? A smooth love track or a roller coaster ride with many twists and turns? --- “I don’t like to walk on flowers if there are no thorns on them. And I’m no saint nor a forgiver… I’m a witch who can make the hell descend on to the earth, on those who tries to step on me. And there is no ‘mercy' in my scary dictionary. ” Elysia scowled as she glared at him. “Oh, so you’re now a spooky poet too, huh? Then let me also add my own share to your so-called poetry.. I can be the thorn in your flower bed if you wish me to be. Try intriguing my rage, I’ll never set you free. If I unleash my demonic side, you’ll perish in the hell you’ve created. Cause the word ‘mercy’ has never existed.. ” Ivan scoffed at the raging lady, standing in front of him. "Not only you but I can act like the devil too." he smirked with his eyes mocking at her. Elysia huffed in rage as she spouted with her venom filled eyes, “You know what!! I just hate you, Mr. Ivan Moore.” “Trust me…The feeling is mutual, Ms. Elysia Davies!” Ivan spat, chuckling darkly at her… --- “Never have I thought in my life that I’ll fall in love with my biggest foe. Now, she is the sole controller of my heart.” Ivan said inching closer to her. “Who could have imagined that I’ll be head over heels with my nemesis whom I have loathed the most in the past..” Elysia mumbled touching her nose to his. “I love you Sia..” Ivan whispered, pressing his forehead to hers. “I love you too, Ivan..” Elysia muttered as their lips crashed in as they kissed each other passionately, under the vast sea of stars.. --- Hi, this is author here… Thank you for looking into the synopsis. If you liked it then please join the rollercoaster ride of this amazing 'Haters turns lovers' couple by adding this book into your library.. I promise that it will be a full package of drama, love, revenge and many more interesting twists and turns which will lead you to unfold numerous of secrets… No rape and physical abuse… But have lots of face-slaps… I hope, you guys will give it a try… ---- This is my second book… My first book is 'My Heart Beats Only For You'.. If you want, then please check it out too… [P.S.- The cover is not mine.] ---- Discord https://discord.gg/AscctQj Insta @sree_exol

My Clever Wife Is Sweet