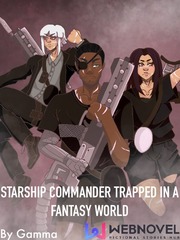 What is Starship commander trapped in a fantasy world

Starship commander trapped in a fantasy world is a popular web novel written by the author Gamma420, covering SCI-FI AND FANSTASY, STRONG TO STRONGER, ROMANCE, Fantasy genres. It's viewed by 1.5M readers with an average rating of 4.33/5 and 30 reviews. The novel is being serialized to 335 chapters, new chapters will be published in Webnovel with all rights reserved.

After crash landing in what turns out to be a fantasy world, the orbital marine Dax will have to fight the powers that occupy the world to reclaim the technology that got stranded along with him and eventually repair his crashed ship to return to his own world. On the way he discovers the rule breaking power of mana, a special particle that seems naive to the world he now is a part of. Feeling seriously outgunned Dax places a priority on regaining his lost weaponry that is scattered throughout the world, ranging in size and effectiveness from electromagnetically powered assault rifles, powered exoskeletons and autonomous drones from the size of a spying UAV to heavy assault ships. But the marine is not alone in his search those weapons, the powers of the world he now finds himself a part of is quickly realizing that something outside their realm of understanding has graced the planet and that those artefacts trapped inside large floating black sphere’s hold vast strategic value. Dax is then faced with a complex problem, he must secure the technology that he needs to leave while at the same time make sure the tools of war from his world is not misused at the cost of being made a target by powers he fails to fully understand. On his way Dax will have run ins with various powers, some of them hostile, some of them a bit more amenable to persuasion and mutual cooperation. After all, what is a knight, king, angel, demon or grand wizard to a railgun or even a tactical class high energy laser in orbit? They’re soft targets. For the record, English is not my first language, so there might be some spelling/grammar mistakes here and there. I’ve been getting better at writing over the last year or so, and have plans to go back and edit my old chapters, but it’s really hard to find the time. Also, check out my discord server if anyone of you wants to trash talk me with a faster response time~ https://discord.gg/n9Xbn7k