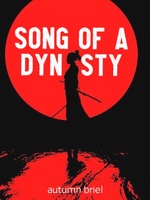 Song of a dynasty

What is Song of a dynasty

Song of a dynasty is a popular web novel written by the author everthewriter, covering ROMANCE, ADVENTURE, FANTASY, FEMALE-LEAD, STRONG-FEMALE-LEAD, ROYAL, MULTIPLE-LEAD-CHARACTERS, HIGH-FANTASY, LGBT CHARACTERS, COURT INTRIGUE, Fantasy Romance genres. It's viewed by 1.1K readers with an average rating of 0/5 and 0 reviews. The novel is being serialized to 1 chapters, new chapters will be published in Webnovel with all rights reserved.

Ruled by an ambitious albeit young monarch, the kingdom of Prylea paves towards its paroxysmal glory- thriving in both magic and prosperity after years of unrest. Cantana'a stands strong as the kingdom's capital- nest to many noble houses, bearer of the country's flourishing trade, and morosely the prospective stage to a vicious ploy. As the last vestige of a dynasty of heretics, Sol knows little separates her from a gruesome death , with an entire nation that wouldn't mind seeing her head rolling down a pit. Tasked to serve the crownless Royal, Ambrose becomes involve in a lethal game of politics and court's machinations, as her loyalties are tested and ideals questioned. Both brought to Cantana'a, what starts under the auspices of festivities and worldly gatherings, sedately unveils a conspiracy of power and deceit. A harrowing conspiracy, they become part of.