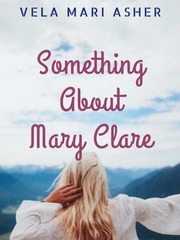 Something About Mary Clare

Is it possible to fall in love with a person you hate so much? <High School Edition> The only way Mary Clare Delamar knew how to treat France Kinsley was as her mortal enemy. Ever since fifth grade, she has learned to hate the resident prick of her life, and the seven years that have passed didn't change anything between them. Hating the prick gave her this addicting feeling of dark satisfaction, and for the longest time now, she was determined to keep it that way. Until the second day of Junior year, when the campus heartthrob unexpectedly transferred to her section and they ended up having to share a table for the rest of the school year. Naturally, Clare expected the worst to happen, but never did she imagine that France would change over the summer...from being her constant tormentor in the past years, he had suddenly become her seducer. And she didn't know how to handle that at all. The only way to stop France from his ministrations was to call for a truce that should effectively end the gradually rising tension between the two of them. Before things got out of hand. Before he succeeded. Before she fell for his trap she knew he was making just for her. The question was, would France agree with it? Or would he still prefer their cat-and-dog relationship and turn down even the slightest possibility of the two of them finally becoming friends? ~~~