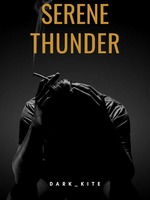 What is Serene Thunder(Jungkook FF)

Serene Thunder(Jungkook FF) is a popular web novel written by the author Dark_kite, covering ROMANCE, R-18, FANFICTION, JUNGKOOK, FAN-FIC, GUN, MINE, Martial Arts genres. It's viewed by 4.7K readers with an average rating of 0/5 and 0 reviews. The novel is being serialized to 8 chapters, new chapters will be published in Webnovel with all rights reserved.

His hot and wild breath fanned her forehead making her hands tightly fisted against her chest. Her olive green eyes were casted down gazing at his polished black shoes with her head slightly bowed down. Putting aside all of her fear and nervousness her quivering rose lips uttered the small word "M-m ove". He did the opposite. She saw his hands raising from his pockets. His slim toned arms with prominent veins rested on either side of her. With his one step front, his lower chest was against her tight fists. He raised his hand placing his index finger under her chin. Her hands immediately caught his finger trying to remove them. Ignoring her attempts he raised her face, making her look at him. His dark brown eyes thrusted penetrating chills into her green eyes. As his eyes moved down to her lips, his hot lips descended downwards and grazed her lips slightly. She abruptly pushed him with her strength, making him take a step back. Before she could run away, his hungry lips smashed with so much force, that the back of her head banged the wall. Do not copy it. DARK ROMANCE. Welcome readers. Do enjoy it.