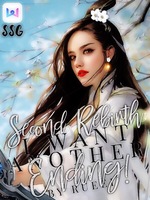 Second Rebirth: I Want Another Ending!

What is Second Rebirth: I Want Another Ending!

Second Rebirth: I Want Another Ending! is a popular web novel written by the author 41t, covering ADVENTURE, CULTIVATION, FAMILY, FLUFF, SLICE-OF-LIFE-ISH, Fantasy Romance genres. It's viewed by 322.3K readers with an average rating of 0/5 and 6 reviews. The novel is being serialized to 29 chapters, new chapters will be published in Webnovel with all rights reserved.

Xueyu lived in Boundless Depth Valley with her master... —but she had always yearned to see the world outside! So it was inevitable that she would escape from home. Consequently, her first life was taken away by her lover. In her second life, her now-ex-lover and her trusted sister killed her once more! She was reborn for the second time! This time, kill her if you want, but have anything against her Master and you shall die! . . . Wait Master! Where are you going? Outside? What— why? No! The outside world is dangerous Master!! I wanted to see the world? That was a lifetime ago! I’m 13? So? Thus, our main character was dragged off to see the outside world, ....or else our plot would not get anywhere.

The Love That Remains

The CEO's Office Boy is a Girl