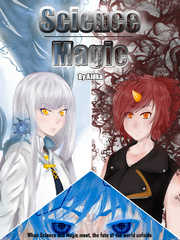 Science/Magic is a popular web novel written by the author Aidka, covering MATURE, ROMANCE, SCI-FI, ADULT, ADVENTURE, WEAK TO STRONG, SWORD AND MAGIC, SLICE-OF-LIFE, DEATH OF LOVED ONES, Fantasy genres. It's viewed by 2.8M readers with an average rating of 4.56/5 and 104 reviews. The novel is being serialized to 394 chapters, new chapters will be published in Webnovel with all rights reserved.

Glenn (Bloed) was abandoned by his family in the Exiled Lands, one of the most dangerous places of the world; where his inability to use magic meant that only death awaited him. However, an encounter with the remains of a completely different civilization was going to change his life forever. When science and magic met, the fate of the world started to unfold. ... Follow my other story in webnovel: Fourth Prince's Debauchery. Support me on P4TRE0N: patre-on.com/aidnovels