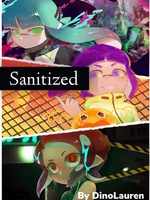 Sanitized is a popular web novel written by the author DinoLauren, covering ROMANCE, SCI-FI, FUNNY, ALIEN, FUTURISTIC, VIDEO GAMES, APPOCALPSE, MULTIPLE, SPLATOON, Sci-fi Romance genres. It's viewed by 849 readers with an average rating of 0/5 and 0 reviews. The novel is being serialized to 2 chapters, new chapters will be published in Webnovel with all rights reserved.

Have you ever wondered what the future was like? Maybe wondered how humanity was doing. Well, what if you were told that in a few thousand years, the sea levels will rise, and then fall, triggering the extinction of humanity. Well, what's left? You'd be surprised to learn that sea creatures evolved, into human like species, and roamed the world just like humans, just a little... differently... Join these three characters as they avenge their species while encountering problems and graces, in the future, where things are fresh... -------- Faith, an awkward clumsy, energetic inkling girl, who is finally welcome in Inkopolis, the world's most popular and large city. Opal, a sweet and innocent octoling girl, after years of being a mind controlled soldier, is welcomed into Inkopolis, despite the two species' former war over the land. Tres, a stark and cold inkling girl, with a dark past, is fighting for the land she so desperately attempted to fit in with. ---------- The three girls' worlds collide, and they're forced to fight together for the second end of the world they know, along with an entire crew of fresh inklings and octolings. With all of the emotion, drama, romance, and terror that goes with being a member of The Squidbeak Splatoon, comes a world beyond compare.