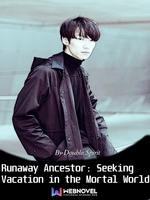 What is Runaway Ancestor: Seeking Vacation in the Mortal World

Runaway Ancestor: Seeking Vacation in the Mortal World is a popular web novel written by the author Double_Spirit, covering MATURE, MARTIAL ARTS, BEAUTIFUL FEMALE LEAD, MALE PRONTAGONIST, DEITIES, COMEDIC UNDERTONE, IMMORTALS AND MORTALS, THREE REALMS, Martial Arts genres. It's viewed by 31.5K readers with an average rating of 0/5 and 2 reviews. The novel is being serialized to 21 chapters, new chapters will be published in Webnovel with all rights reserved.

On a certain day, the Three Realms witnessed an astonishing sight: An age-old, ancestral immortal emerged from seclusion for the first time and fled into the Mortal Plane to seek refuge in the span of a single century. The reason? "Shang Xuan is mine! Only this Yu Lian, the daughter of the Jade Emperor can have him as my husband!" As one of the oldest creatures of the entire Three Realms, to be proposed by a young female immortal whose age wasn't even a hundredth of his own on the moment he decided to venture through the world... How could anyone stomach the affront to their reputation!? Shang Xuan made a choice: to escape into the Mortal Plane to avoid the nagging of the "young" female immortal, the odd stares of his limited circle of "friends", and to avoid the besmirch on his reputation... of course, such a "vacation" didn't come without a cost. Having been deeply scammed by his "sincere friend" Meng Po in his vacation to a mortal world, Shang Xuan would be involved into an uncontrollable spiral of chaos, from serving as a bodyguard, then an assassin, and all other sorts of "non-relaxing" professions... How was this anything related to the concept of a "vacation!?"