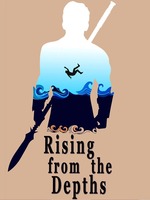 Rising from the Depths

What is Rising from the Depths

Rising from the Depths is a popular web novel written by the author Coconut31, covering ANTI-HERO, ROMANCE, ADVENTURE, SYSTEM, FANTASY, MONSTER, POST-APOCALYPTIC, STRONG-MALE-LEAD, MALE-LEAD, LITRPG, Fantasy genres. It's viewed by 183.8K readers with an average rating of 0/5 and 7 reviews. The novel is being serialized to 114 chapters, new chapters will be published in Webnovel with all rights reserved.

Earth is bought and fused with two other alien planets, but before the new overlords take total control, the System decides to grant the original inhabitants one last chance to reclaim their fates. Stuck on an unfamiliar world in the midst of sentient creatures and savage monsters, humanity will struggle to survive until they learn to adapt to their harsh, new reality. However, Silas could ask for little more as the calamity provides him with the opportunity to turn his wreck of a life around and finally face the mess he once ran away from. Little does he know of the terrible foes he will face on the way, the grand powers he will gain, and the legions he will command. This is the tale of Silas Wycliffe, the Godkiller.  Author’s note: System-regulated Apocalypse story following a powerful (but not overpowered) MC and the village that he helps set up. While it is graphic, it isn’t overly dark. Released 4 times a week. Enjoy!