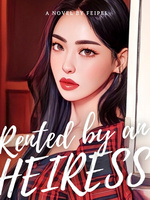 Rented by the Heiress

What is Rented by the Heiress

Rented by the Heiress is a popular web novel written by the author feipei, covering ROMANCE, SWEET LOVE, HEIRESS, LADY BOSS, Contemporary Romance genres. It's viewed by 60K readers with an average rating of 4.2/5 and 16 reviews. The novel is being serialized to 8 chapters, new chapters will be published in Webnovel with all rights reserved.

Little baby moonshine: Mum, how did you meet dad? Yona: Hmm. It was during a vacation. Mummy was lonely, so I rented your dad through an app. Little baby moonshine: ..... ---------------- Yona Worth, sole heiress and current CEO of W&W Corp.. The precious daughter of the carefree and eccentric Aiden Worth and Yui Watanabe. Beloved by her employees and hailed as the up and coming business genius. Beautiful, elegant, fierce. And ....single... as of five minutes ago. Her fiance, Wilding Inc. heir, terminated their engagement because she was too 'aggressive', 'unladylike', and an 'ambitious woman desperately climbing up a man's world'. Riiiight. She punched that scumbag right in his obnoxious face, and promptly ended their farce of an engagement. After filing for an indefinite leave, she threw all of her duties to her brother, the Prince Charming of all Media. And then flew across the Pacific and landed in the historic land of her mother's birth, Japan. Not wanting to be lonely in her grand vacation, she downloaded an app called Boyfriend-for-hire; rented their number one guy and availed full services. Except she didn't expect the number one boyfriend for hire was a housewife incarnate. Yona was tempted to take him home for good. ---------------- Disclaimer: I don't own the images I used for the cover, got it from Pinterest. :D A/N:This novel is mostly going to be light, fluffy, and straightforward romance. If you're looking for a novel with a drastic plot twists and all, this isn't for you. But if you're tired of that kind, you can give this a try. Update Schedule: 1 chap/day with spontaneous mass releases in between. (It all depends on the circumstances.)

Secret Wife is a Crazy Beast