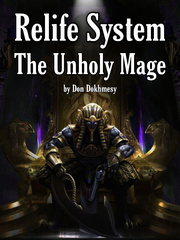 What is Relife System: The Unholy Mage

Relife System: The Unholy Mage is a popular web novel written by the author Mr_Don, covering SYSTEM, MAGIC, Fantasy genres. It's viewed by 1.8M readers with an average rating of 4.61/5 and 110 reviews. The novel is being serialized to 42 chapters, new chapters will be published in Webnovel with all rights reserved.

The World's Number 1 Most Wanted Thief, the Black Cobra, an Egyptian youth specialized in ancient artifacts, was killed in an explosion he set up after being chased into a dead end in New York. Around his middle finger which he pointed at the face of every chaser from every world superpower, he carried the most prized item in the world, the Ring of Horus. When he kicked off life with a Bang! He returned with a lot of barf and vomit as poison was being cleansed of his body and a series of messages kept popping up. Long story short, he reincarnated into the body of Leon, an antagonist from a game he used to play and supposedly one who should already be dead. However, the Hunt for his Life never ended and he became the most wanted after reincarnation overnight. And there is System and Magic and Harem and Overpowered Oversmart Overcharismatic Hero who believes in gender equality and human's right to stay silent when he stabs them… good stuff, turly! (Author Note: The story tries to avoid the cliches and focuses on crime and politics. Not sure about titles with the same quality as this one but I take elements from the usual isekai and mash them with the Korean style characters and attention to details while avoiding the Chinese repetitive plots and the Japanese beta male leads. This is an Egyptian MC whom you have never seen any like before. He kisses babies and slaps bitches… or kisses bitches and slaps babies… depending on which day of the week it is. He's a mean guy and he knows kung fu. One time an author tried to write him in a novel, the novel almost absorbed the author and he went into a torturous isekai. What more can I say? Read it already!) -------------------------- Be sure to support on Patreon, I appreciate everyone there. And join our active community on Discord. URL: https://linktr.ee/donovel This story is on Royal Road, Scribble Hub, Moonquill and Wattpad!