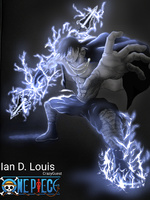 Reincarnation in One Piece: The Adventure of Ian Louis!

What is Reincarnation in One Piece: The Adventure of Ian Louis!

Reincarnation in One Piece: The Adventure of Ian Louis! is a popular fanfic written by the author CrazyGuest, covering R-18, HARÉM, REINCARNATION, FAN-FICTION, ROMANCE, ACTION, ADVENTURE, PIRATES, ONE-PIECE, OVERPOWERD-MC, Anime & Comics genres. It's viewed by 4.1M readers with an average rating of 4.76/5 and 169 reviews. The novel is being serialized to 148 chapters, new chapters will be published in Webnovel with all rights reserved.

{This is a reincarnation story in the world of one piece. the mc will be extremely overpowered, and to a certain extent this can be considered a wish-fulfillment story.} This story is about Ian Louis, a normal young person who had plenty of money on him, from the successful company he raised from scratch. He used the money wisely and even donated regularly to charities and orphanages. he grew up parentless and was lucky enough to fall in love with a girl and ask her hand. sadly for them, they both died in an unfortunate accident before they were married. both of them had been avid lovers of the anime One piece and always fantasized of what it would be like to live at that world. Now that wish would be fulfilled. (I'm told the fun part of my story starts around the water seven ark which is in chapter 18, so please read until then first before judging the story) (There will be sexual content at some point in the future) so this novel would be only for those [+18] Also, the mc won't join the straw hats and would have his own crew. so ignore the comments where I had said he will join as at the time I was still undecided. For advanced chapters ahead of the release schedule, head out to my Patreon page! -My Patreon: www.patreon.com/CrazyGuest ..................... Disclaimer 1: I do not own one piece. Please support the official release and know I claim no ownership or credit regarding the existence of pre-existing characters or content. Disclaimer: Cover photo not mine, credits to the owner. ..................... This is my second time writing a story and the first time writing a fanfic, and English is not my first language, but if you have any suggestions for me on where to take the story then please leave them on comments or reviews. This is an AU of one piece.