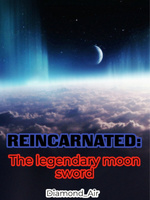 Reincarnated as The legendary moon sword

What is Reincarnated as The legendary moon sword

Reincarnated as The legendary moon sword is a popular web novel written by the author Diamond_Air, covering REINCARNATION, FANTASY, ACTION, ADVENTURE, MODERN, SWORDS, COMEDY, ROMANCE, Sci-fi genres. It's viewed by 36K readers with an average rating of 4.72/5 and 10 reviews. The novel is being serialized to 54 chapters, new chapters will be published in Webnovel with all rights reserved.

Etɔrnam, the assistant of the most powerful female swordsman at his time was cursed never to have a pleasant reincarnation. That is, he would never reincarnate into a new life as a living being with new opportunities but would be stuck as an inanimate object for eternity, be it a stone or a house this curse simply didn't care. Having a deep love for her assistant, the great swordsman provided her legendary moon sword as a vessel for his next life right after she had been killed in one of the greatest wars in history; the war of blood and turmoil. She used the remaining part of her life as a source of power that would prevent her dear subordinate from ever breaking... Now, war after war the sword is used and discarded. This went on for ages... until, the thirst for war was forgotten thus, leaving him in a deep slumber beneath the soil of the land used for the purposes of technology.