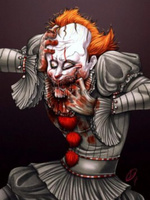 What is Reincarnated As Pennywise

Reincarnated As Pennywise is a popular fanfic written by the author GrimHunterV, covering Movies genres. It's viewed by 1.1M readers with an average rating of 4.37/5 and 40 reviews. The novel is being serialized to 30 chapters, new chapters will be published in Webnovel with all rights reserved.

A random guy died and now is reincarnated as Pennywise the dancing clown from Steven King’s IT, he is now tasked to finish what the original failed to do by the same ROB who turned him into a inter dimensional shapeshifting clown. Will he be able to kill the Losers? or will he forever repeat the same mistakes as his predecessor?