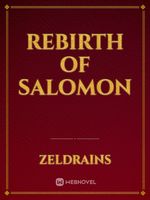 What is Rebirth of Salomon

Rebirth of Salomon is a popular web novel written by the author Zeldrains, covering ADVENTURE, REINCARNATION, MAGIC, OP-MAIN CHARACTER, MAGIC-SWORD, CLASS, Fantasy genres. It's viewed by 573 readers with an average rating of 0/5 and 0 reviews. The novel is being serialized to 1 chapters, new chapters will be published in Webnovel with all rights reserved.

Once four divine beings alias, *the saints* created a whole new world, their intentions were creating a world with no fights and greed, and the only way to get might be the way of knowledge! The divine being *Salomon* decided that the only way to achieve might be to get knowledge, the knowledge of magic, and other things! So they all created many races, and all of them lived in the piece together, learn together, and respected each other, but once all divine beings died or disappeared, the world fell into chaos. The races began to fight each other, but the winner was the one who knew the three mightiest knowledge the magic, swords, or martial arts! The races fought for hundreds of years, and billions of creatures died. This event was called the *war of knowledge*, and the winner were the humans! Two thousand years later, Salomon was reborn and couldn't remember what happens in the last two thousand years. He didn't know how he died, but when Salomon noticed how the world changed, Salomon knew he had to change the world! "I'm Salomon, one of the four saints!" --------------------- Fun project !