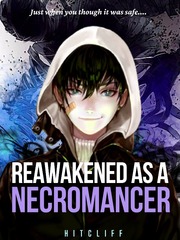 Reawakened as a Necromancer (The Rise of Necromancer) Volume 1 is a popular web novel written by the author Hitcliff, covering CULTIVATION, ROMANCE, ACTION, ADVENTURE, SYSTEM, OP-MAIN CHARACTER, GAME-LIKE ASPECTS, SUPERNATURAL POWERS, FANTAAY, NECROMANCER MAGIC, Video Games genres. It's viewed by 20.5K readers with an average rating of 0/5 and 2 reviews. The novel is being serialized to 3 chapters, new chapters will be published in Webnovel with all rights reserved.

"…In an Apocalyptic event, humans have no chance of survival a Necromancer will arise...” Follow "Yocki's" story, where the epic showdown between good and evil will be battled, as he uses his reawakened dark forces to cultivate, cheat, gain, override the system and become a sovereign in his reality. This story focuses on “Saeki Yocki,” also known as “The Sovereign of Death,” the hero starts as a normal teenager, nothing special about him, when the calamity occurs, he becomes one of the “Lightborn,” even though he is one of the chosen by the angels, he has no special abilities or whatsoever to showcase, he is the “Weakest Lightborn,” he barely survived fighting in the portal...when a sudden turn of events “Death” finds him, while he bravely accepting his demise he received a strange power from “Death” itself. However with a twist of faith "Yocki" found out that when most people could harness the power of “Lightbringer” a power given by the angels he was the only one with the force that doesn't come from light but from the darkness, as the struggle goes with the power of darkness at his disposal he became more powerful, as he used his reawakened dark force to help mankind for the greater good. Transforming from the “world’s weakest" to the “world strongest S-rank.”