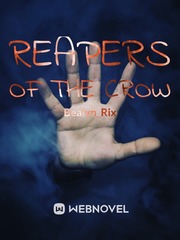 Reapers of the Crow

What is Reapers of the Crow

Reapers of the Crow is a popular web novel written by the author Bealyn_Rix, covering MYSTERY, DEATH, VIOLENCE, MURDER, SARCASM, NIGHTMARES, Fantasy Romance genres. It's viewed by 1.5K readers with an average rating of 0/5 and 0 reviews. The novel is being serialized to 2 chapters, new chapters will be published in Webnovel with all rights reserved.

Silver spheres stare back at me from within the darkness consuming the room. They pierce directly through me. Reaper? I think not. Throughout history, it is said that the crow, in many cultures, has played a part in representing both positive and negative symbolic meanings. Just like the raven, the crow signifies rebirth, the mystery of creation, healing, destiny, renewal, intelligence, adaptability, recovery, reflection and even an omen for death. They are generally known as spirit guides with the ability to go beyond the illusions of inner and outer, under and over, and forward and backward in worlds unseen by mortals eyes. As guides, crows aid lost souls by helping them cross through transitions smoothly by casting light into the darkness that shadows over them. It's also believed that the crow had the power to manipulate its physical appearance making some consider them to be tricksters and manipulative little creatures. Even their color is a representation in itself being of what has not taken form yet, creation and possibly even the void.