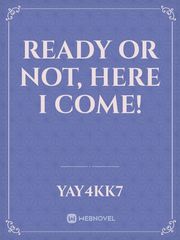 Ready Or Not, Here I Come!

Set in America ~ When they were young kids, they lived across the street together. Two kids with a passion for adventure, best friends. However, the boy’s mother suddenly dies, forcing the boy and his father to move away across the country. After losing her best friend, Rica had only one other person to rely on. Her other friend helped her get through her last year of middle school while she was down. She came out with a 4.0 GPA, and got into a nice high school in California. New York was fun, but it was so much better with two friends instead of one. She would enjoy the beaches more. And the sun. Ocean. And maybe even the small chance that she could find Tris. Growing up with no female influence has made Tristan hard. He could withstand pain. Pain from his lost friend. Pain from football. And pain from the occasional beating from his father. They used to be a happy family back in New York, but his mother dying had changed all that. Though his father was a rich company owner, he would sometimes come home drunk, making Tristan scared in a corner, fearing assault. So he took some of his father’s most violent tendencies to high school. He was trapped in the cycle of violence, just waiting for someone to save him. Along with following the contest guidelines, I want to share with readers the places in San Mateo County, California, so the places in this story are all real (unless I wanna make something up).