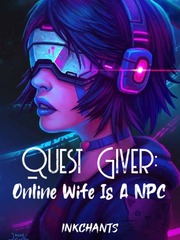 "Sis, stop playing." "Sis, get a job." "Sis, stop freeloading off me!" Ardella Dezel was a professional Esports player, that is until she left the arena a year ago because of her attitude towards her boss, the handsome but annoying Emre Nolan. "Who asked him to shut down my computer in the middle of the game?!" - Ardella "Who plays a game in a stranger's house in the middle of the night?" - Emre Enter a new virtual reality MMORPG game, Seven Infinity and she's determined to set out her revenge to Emre when she knows he's going to play it. Due to a system error, Ardella became an immortal NPC instead of a player, in which her job is to give out quests to other players. Though it does make it more convenient to bully new players and disrupts Emre's gameplay by giving him impossible quests! *** "What?! Are you crazy! Who can kill a demon lord at Level 10?" "Don't want to? Then kiss goodbye to the next level."