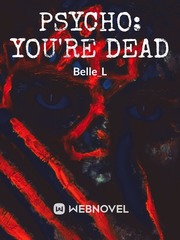 What is Psycho: You're dead

Psycho: You're dead is a popular web novel written by the author qT_Tp, covering VILLAIN, PSYCHO, FANTASY, PSYCHIC POWERS, MURDERER, TAINTED, Fantasy genres. It's viewed by 2.2K readers with an average rating of 0/5 and 0 reviews. The novel is over and can be read all 0 chapters in Webnovel with all rights reserved.

Rin was different from the other children his age. Throughout his childhood he got beaten up for just simply being different. He had this mind which didn’t work like the others. Twisted thoughts and emotions ended in reckless actions. His life seemed different inside his head, until his thoughts came to realise that it wasn’t. He needed to adapt, change, evolve … The society was built on lies, corruption and greed. Even Rin could understand that. However, he was no hero. He was the psycho, and you’re dead … Join the creation of a mass murderer and villain who will torment anyone who crossed his bad side, which was mostly the outcome. ------------------------------------------------- WARNING! THIS STORY CONTAINS VIOLENT AND GORY SCENES. IT IS STRONGLY ADVICED TO BE ABOVE THE AGE OF 16. ------------------------------------------------- This is a story I will create at the side of my main novel “The Black Tiger”, therefore updates can be a bit slow. I will consider to publish more chapters if requested by multiple readers.