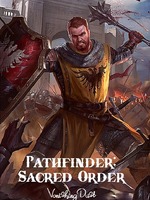 What is Pathfinder: Sacred Order

Pathfinder: Sacred Order is a popular web novel written by the author VanishingDust, covering GAME ELEMENTS, SWORD AND MAGIC, MEDIEVAL, NOBLES, RISE TO POWER, CONSPIRACIES, Video Games genres. It's viewed by 314.7K readers with an average rating of 4.63/5 and 20 reviews. The novel is being serialized to 86 chapters, new chapters will be published in Webnovel with all rights reserved.

On the surface, the young emperor reigns while in the shadows the ministers are in actual control. An empire whose history spans five centuries now begins to crumble as the generals whose purpose is to protect the peace begin to fight each other instead. Underneath the surface, one ambitious man gathers the citizens who feel oppressed by the heavy taxation, food shortages, and threats of war. A rebellion begins to stir and soon, a rain of chaos shall begin. In the midst of it all an orphan boy gets a second chance at life. Although, his life is not his own as it is inhabited by a video game developer. The same developer who has helped shape this world. Little did either of them know that their lives would never be the same. ☆☆☆☆☆☆☆☆☆☆ Schedule: 1-2 chapter per day (Around 2 pm est and 7 pm est.) Chapter Lenght: 500 - 900 words (These are parts, not full chapters, therefore, the best way to read is to let them stock up then read in one go.) Warning: Slow start, trying to focus on building up the world and characters. ☆☆☆☆☆☆☆☆☆☆ Inspirations: Crusader Kings | Mount and Blade | Romance of the Three Kingdoms