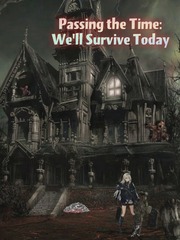 At the age of 4, a girl realizes that she possesses a unique power. As she puffs her cheeks to blow out the candles on her birthday cake, the world seems to spin around her; instead of joyful laughs and bright smiles, she sees gaunt faces around her with sunken eyes and torn clothing. They all turn toward her and break out in a menacing grin, revealing rows of crooked and rotting teeth. She opens her mouth to scream, but her voice fails her and she scrambles out of the house as fast as she can. She soon regrets it, as the roads and sidewalks are also occupied with the same horrifying zombies in her house. Although the bodies of her family still walk on this planet, she knows they are forever gone. Taking advantage of her small form, she flees to an empty alleyway; or so she thought. A low growl sounds from behind her. Suddenly, she's surrounded by those flesh-eating monsters! She sprints away from them as fast as she can, but ultimately gets trapped in a dead end. Only wanting to escape and survive from this nightmare, she focuses all her energy to teleport to another time period. Her surroundings waver once again and she shuts her eyes as she hears the zombies' footsteps approaching her. She opens her eyes groggily and they widen when she feels the silk covers encasing her in a warm coccoon and the same material draping around her bed. A woman dressed in maid's clothing knocks gently before slowly opening the door. "Princess Ezmera, you are awake." WHAT!? Though her energy would eventually recover, she would need to wait at least 20 years to regain enough power to go back to the future and hopefully set things right. However, she later meets a man who just might be worth staying for.