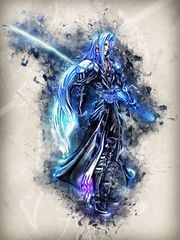 Overlord - Of Sin and Sanctity (Discontinued)

What is Overlord - Of Sin and Sanctity (Discontinued)

Overlord - Of Sin and Sanctity (Discontinued) is a popular fanfic written by the author Thousandragons, covering others genres. It's viewed by 692.1K readers with an average rating of 4.8/5 and 13 reviews. The novel is over and can be read all 34 chapters in Webnovel with all rights reserved.

With over 2000 classes that normally ranged between base high and rare, over 6000 spells and a wide range of effective playstyles, there was virtually no way to create a 'perfect character'. However, some came much closer than others. The great and revered Lord Touch-me, for being one of the top ten players in the world, gained the class of World guardian. In each of the nine worlds, the top player received the class of World champion and a unique item. Finally, there were those that created characters seen by the developers as the pinnacle of a build, with the perfect spread of classes and stat distribution. While this may be a seemingly impossible task, with so many people playing the game, over the course of the twelve-year runtime three people did succeed. Of course, all three of them did great things but we... I at least... Only care about the fallen chrono-angel 'Dabilosi Tesifa' since he is the only one who joined Ainz Ooal Gown and, let's face it, this is an Overlord fanfiction. Naturally, I do not own Overlord. I also do not own the picture displayed. Note: If requested I will remove the picture... Given adequate proof of ownership.